Today we are happy to announce the release of OpenSolver 2.7.0, available for download here. The release fixes a large number of bugs and also introduces some great new features:

We have also updated the included solvers to the following versions:

As always, please let us know how you find the new version, and we appreciate any feedback you can offer.

There’s an interview online at Chandoo.org with Dan Fylstra, the creator of Solver, the add-in which has made such a contribution in bringing optimization to the millions of Excel users.

Building good linear and integer programming models is not easy. However, I have just come across the AIMMS Optimization Modelling book which covers many important modelling ideas. The AMPL book is also a good reference that I can fully recommend. Enjoy. Andrew

This small bugfix release fixes an issue with OpenSolver on 32-bit Windows, where the solver executables could not be found.

We had a report yesterday from a user Daryl that BitDefender was reporting a possible virus infection on his PC that appeared to be connected with OpenSolver. Thanks to great work by Daryl and our programmer Jack, we identified this as a false positive (i.e. an incorrect report of a virus) being triggered by BitDefender’s ‘heuristics’. BitDefender was objecting to some of our VBA code, including one of our comments. (Note that I said comment, not actual code, and so this is definitely a case of BitDefender being overzealous!) We will tweak our next release to better avoid false reports such as these.

Thanks, again, to Daryl for contacting us with his concerns. Much appreciated.

We are pleased to announce the release of OpenSolver 2.6.1. This release contains numerous bugfixes, as well as some new features:

Please let us know how you find it. In particular we are always interested in feedback on the OS X version, which should be a lot more robust now.

This user feedback helps summarise why we created SolverStudio, our free tool for Excel users that want to build bigger optimisation models:

Dear Andrew,
Couple of months ago you had advised me to solve [my OpenSolver] model (which takes 1.5 hours to even create set up file) in SolverStudio.

I followed your advise and now I would like to share my real life experience about such a big model.
While OpenSolver was solving my large problem in 2-2.5 hours (including setup and solution), SolverStudio GAMS formulation reduced the solution time to 2 minutes. I’d like to take this opportunity to thank everyone who developed such a tool. Also, SolverStudio greatly quickened up NEOS solver use. It was kind of painful to NEOS solver on its own…

We are excited to announce that OpenSolver has made it to Google Sheets, letting you solve your optimisation problems with OpenSolver from anywhere!

With the OpenSolver Add-on you can solve both linear and mixed-integer programs from within Google Sheets with no additional setup required. We use the excellent, open source solvers Glop (for LP) and SCIP (for MIP) to solve the problems.

You can install the OpenSolver Add-on by clicking on the Chrome Web Store link below and then clicking on the “Free” button. You can also find us by searching for “OpenSolver” in the Google Sheets Add-on store. Once the Add-on is installed, you can find OpenSolver in the “Add-ons” menu inside the spreadsheet.

This is our first release of this Add-on, so please let us know how you find it! You can either leave messages here, or leave feedback on the Chrome Web Store by following the link above. If you use the Add-on and like it, please consider leaving us a review in the store so that we can move up the rankings inside the store.

There are some currently some limitations, mainly that the model can only be contained on a single sheet. This is something we intend to fix very soon.

If you have any feature requests or experience any problems while using it, please let us know either here or by using the “Report an Issue” button inside Google Sheets (you can find this in “Add-ons > OpenSolver > Help”). If you use “Report an Issue”, please make sure that you include your contact details, otherwise there is no way for us to follow up!

Give it a try and let us know how you find it!

I’m very pleased to see that the pioneers who played such a pivotal role in creating COIN-OR and all the great software that makes OpenSolver & SolverStudio possible have been awarded the INFORMS 2014 Impact Prize. Well done to Brenda Dietrich, JP Fasano, John Forrest, Lou Hafer, Brady Hunsaker, Laszlo Ladanyi, Robin Lougee, Ted Ralphs, and Matthew Saltzman for all their hard work over the years. They will receive their award at the INFORMS conference Award Ceremony this Sunday.

Ted will be demo’ing both OpenSolver and SolverStudio at this event, and also giving an overview of all the other tools COIN-OR makes available.

Today, our downloads passed the 100,000 mark. Thanks to all the Engineering Science students who have contributed code to OpenSolver over the years, and all the users and beta testers who have helped us iron out the bugs and add more useful features. 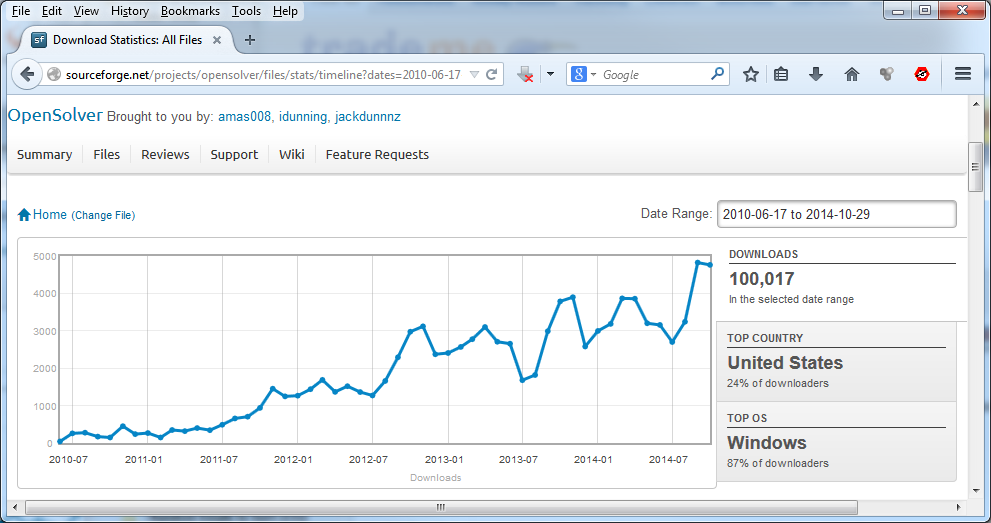 We are happy to announce that OpenSolver 2.6 has been released.

This is a major release that supports Office 2011 for Mac OSX for the first time! Nearly all of the features of the Windows version are working on Mac, the only notable exception is the non-linear NOMAD solver, which is not supported on the Mac version at this stage. However, all of the other non-linear solvers are available as normal.

This brings us to the other main addition in this release which is the ability to use the COIN-OR non-linear solvers locally. The Bonmin and Couenne solvers were previously only available on NEOS as cloud-based solvers, but they can now be used on your machine locally (both Windows and Mac), which should offer more convenience. This feature is very experimental, as these solvers rely on us converting the Excel model into another model format and we currently only support doing this for a subset of the functions in Excel (most common functions are working). These solvers will fail if your spreadsheet uses functions OpenSolver cannot interpret. If you get a message about an unsupported function, please let us know so we can look at adding it in. These solvers are included in the ‘Advanced’ release, more on that next.

The last main difference in this release is the release format. Instead of offering a single download, we are offering separate downloads for Windows and Mac. This is so Windows users don’t have to download the solvers for Mac, and vice-versa. We are also introducing ‘Linear’ and ‘Advanced’ downloads. The Linear download only contains the linear CBC solver, whereas the experimental Advanced download comes with the non-linear solvers Bonmin, Couenne, and NOMAD. Both releases can use the NEOS solvers, and can use Gurobi if installed on the machine. If you aren’t sure, the default download is the Linear version for your computer (either Windows or Mac as appropriate).

You can see the releases here. There are a lot of changes in this release, especially since it is the first Mac release, and we are looking for any feedback you have, as well as any problems you might run into while using it.

Trying to sell optimisation to your colleagues? This IBM video does a good job:

Thanks to Michael Watson for linking to this from his blog.

This release fixes a bug in the non-linear NOMAD solver that occurred when constraints had errors during the solve process. Thanks to smurt for finding this one!

You can download it here. Feedback welcome as always!

In this release we are adding support for the NOMAD non-linear solver in 64-bit Office. Differences between the 32 and 64-bit versions of Office previously caused NOMAD to crash in 64-bit Office, but these issues have been identified and resolved now.

For anyone that might run into a similar problem in the future, the problem was our use of Application.Run to access the NOMAD DLL:

When Application.Run was used like this on 64-bit Office, any C API calls from the DLL back into Excel would fail. Instead, the function must be called directly and everything then works fine:

You can get it here. Let us know how NOMAD goes in 64-bit Office, and we welcome any other feedback too!