We are pleased to announce a new release of OpenSolver for Google Sheets. This fixes bugs in the GLPK solver and NEOS-Cbc solver options which made them unavailable. These engines should now be working and available.

Errors which stopped the GLPK solver from running were related to local variables in scriptlets not being defined before Html template objects ‘glpkWorkerJs’ and ‘glpkRunnerJs’ were evaluated and ran these scriptlets. Errors such as “ReferenceError: gmplModel not defined” should now go away since local copies of these variables are initialised inside these scriptlets.

As of January 8, 2021, NEOS requires that an email address be submitted with every job. The NEOS-Cbc bug was related to this – originally we did not include a user email address in the xml file sent to the NEOS server.

Since NEOS now requires that each job contain an email address, we include the user’s email address in the xml file. This email address is only sent to NEOS when the model is being solved and only if the user selects NEOS-Cbc as the solver engine.

We have updated our privacy policy and information about OpenSolver for Google Sheets to reflect these changes.

As always, we welcome your feedback. Please comment below if it works ok, or if you encounter issues, or if you have any questions regarding the new release. Thanks!

We’ve released OpenSolver 2.9.4 for beta testing! You can download this new version of OpenSolver from: https://sourceforge.net/projects/opensolver/files/.

Below are the release notes that cover the changes made in this new version of OpenSolver:

As always, we welcome your feedback. Please comment below if it works ok, or if you encounter issues, or if you have any questions regarding the new release. Thanks!

We have implemented a fix so that OpenSolver for Google Sheets should now be accessible and working again.

It seems that some of the comments in our code were causing an OAuth scope /auth/script.scriptapps – which we do not need or use – to be detected. These comments have now been removed, so we expect error messages like “Sign-in with Google temporarily disabled for this app” to stop appearing.

We’d greatly appreciate it if you could test that it now works. Please comment below if OpenSolver for Google Sheets works for you, or if you encounter any issues, or if you have any other questions.

Today (10 Dec 2020) was a big day for OpenSolver, as we rolled past the 500,000 downloads count. Many thanks to all our Engineering Science (University of Auckland) students who have worked on this over the last decade, with a really large thank you to Jack Dunn for his major contributions over many years (including creating the Mac version). The community feedback is also much appreciated – thanks for letting us know of issues and suggesting enhancements. Cheers, Andrew

ResearchGate let me know today that OpenSolver is being used to help allocate mental health personnel in the US Navy.

Most of our OpenSolver users choose the standard integer programming solver, CBC (which is the default option). COIN-OR, the non-profit who support and develop CBC, have just announced a new support forum for CBC users. (This is a beta test of the new GitHub discussion forums being developed.) This is the best place for advanced users to take technical questions, such as queries about CBC parameters (which OpenSolver supports). Andrew

As always, we welcome any feedback! Please comment below if it works ok, or if there are any issues encountered, or if you have any questions regarding the new release. Thanks!

12 Feb 2020: It was raised to us that OpenSolver for GoogleSheets is still unaccessible to new users. We are now able to replicate this bug. From our tests, new user accounts are able to install OpenSolver for Google Sheets as an Add-on from Chrome Web Store. However, the “Sign in with Google is temporarily disabled for this app” screen will still show up when trying to open the sidebar from the ribbon. We are very sorry for the inconvenience and we have contacted Google regarding this issue. We need to wait for Google’s response on this, therefore we are unsure of when this problem will be fixed.

10 Feb 2020: This is no longer the case! OpenSolver for Google Sheets is now back online for new user installations. The “app isn’t verified” screen will no longer show up for new installations. We have also updated our privacy policy to align with Google’s requirements. For more information on the usage of Google OAuth scopes please visit our OpenSolver for Google Sheets page and our Privacy Policy page.

Original post: Changes made by Google mean that OpenSolver for Googlesheets is currently not working for new users who want to add it to their Googlesheets. (Apparently the first 100 users each month can sign in, but then further sign ins are blocked by Google.) We are working on fixing this, But we don’t know how long it will take, sorry. We suggest you use OpenSolver for Excel until we get it working properly for Googlesheets.

Sorry for the inconvenience.

Google has a nice article here, that includes a recommendation to use OpenSolver. Enjoy!

We justc ame across an interesting article using OpenSolver to help develop optimal policies for conservation.

Today we are releasing OpenSolver 2.9.0 which adds the SolveEngine from Satalia as a solver. For more information on the SolveEngine, you can check out this post.

As always, we welcome any feedback!

OpenSolver reached another download milestone this month. If my car had reached 300,000 on the dial, I’d be looking at getting a new one. Fortunately, OpenSolver gets better with age.

Thank to all our users for their support.

Today we are releasing an update to OpenSolver for Google Sheets that includes a new solver: the SolveEngine from Satalia

The update will roll out over the next day or so, and you will then be able to access the SolveEngine in the list of available solvers. The first time you use the solver, you will be prompted to enter your SolveEngine API key, which you can obtain by creating an account using the link in the prompt. This is the beta version of the SolveEngine, which will be free during the beta period. After the beta has ended, users will receive 1 hour of free solving time per month. There will be no queuing during the beta, and after the beta there will be a short queuing time for free users.

The SolveEngine is a cloud-based system, similar to NEOS except with more powerful solvers and much shorter queue times. We hope that it will prove a useful and powerful alternative to the other solvers we offer, and have plans to also offer it in OpenSolver for Excel in the coming future.

The SolveEngine boasts many features that make it a powerful tool for solving a variety of optimisation problems, notably:

Users of the SolveEngine benefit from :

Optimisation problems exist across the entire spectrum of business, science and engineering. The SolveEngine has already been used to solve many hard computational problems in graph theory, logistics, system verification, BigData and cryptography. 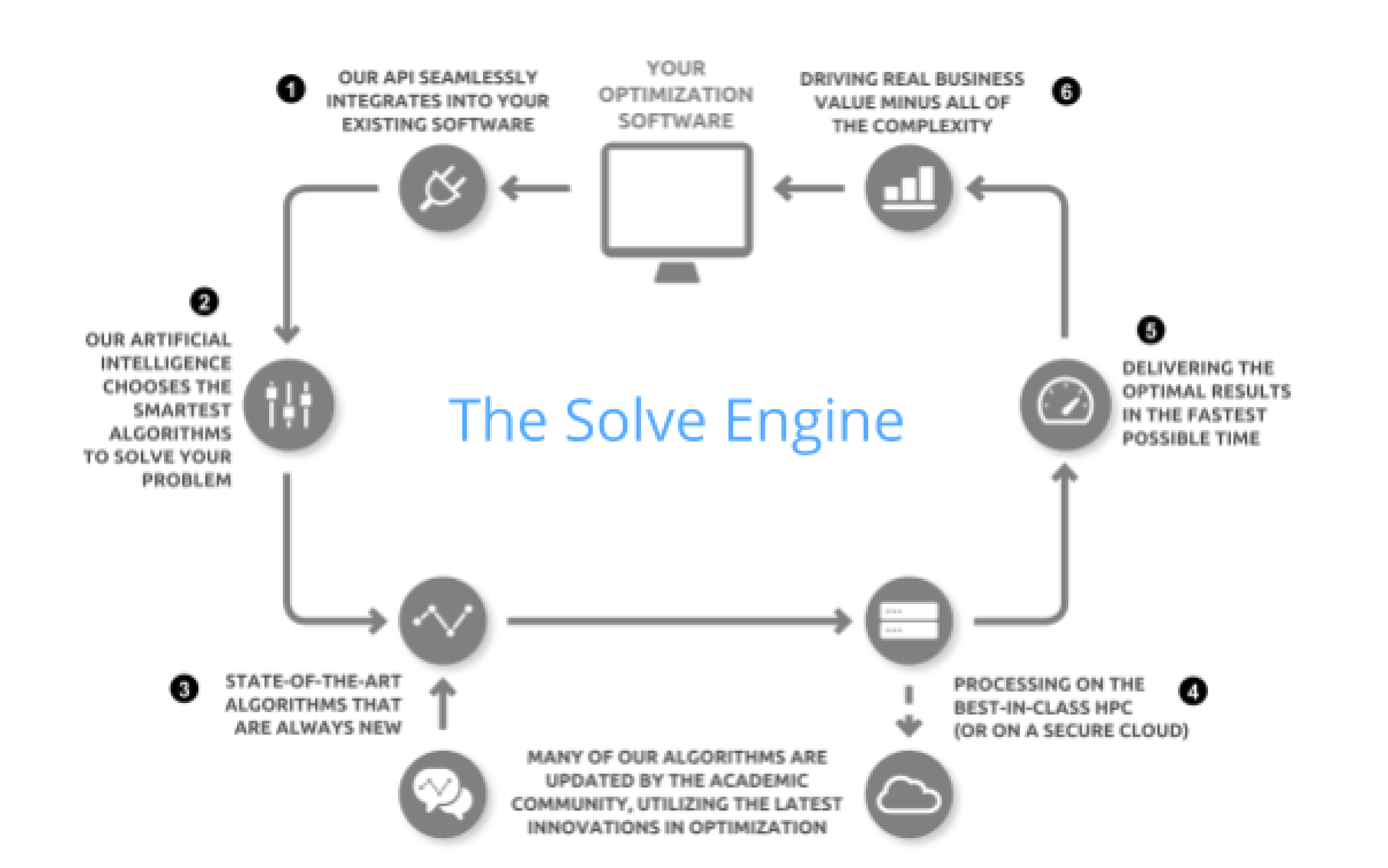 Satalia is a spin-out from the UCL Department of Computer Science. Satalia’s team of academics and artificial intelligence experts harness a library of algorithms, hosted in the SolveEngine, to help companies and organisations solve the world’s most difficult problems. In 2016 Satalia was recognised in the elite Gartner Cool Vendors in Data Science list, the only UK company chosen.

Satalia’s commitment to continued innovation in algorithm development underpins the SolveEngine model through which academics and commercial solver developers can deploy their solvers to the SolveEngine to address the current and emerging requirements of industry and research communities. Providing access to state-of-the-art optimisation algorithms, Satalia enables the industry to analyse problems inputs more efficiently and thus to solve their problems more rapidly.

We have released OpenSolver version 2.8.6 which fixes various bugs:

You can get the new version here.

As always, please let us know about any issues you might have, or features you would like to see in future releases!